Tomorrow marks the first day of June so this week we’re celebrating all the sporting events that June has to offer from the very English to the big dates in the international sporting calendar.

A key date in all tennis lover’s annual calendar is Wimbledon! From the 24th June to the 7th July, London will once again play host to best tennis players in the world. As with many other British sporting occasions, Wimbledon is steeped in tradition, from the player’s white tennis kit to requisite consumption of strawberries and cream. Strawberries and cream have become so synonymous with Wimbledon that spectators now consume a whopping 28,000 kilos of strawberries and 7,000 litres of cream during the tournament. They aren’t just any old strawberries but the finest Kentish strawberries picked no more than 24 hours earlier.

Another truly British event which will be taking place this June is Royal Ascot which runs from 18th-22nd of the month. Last year some brave visitors to Ascot swapped their favourite hats for some very adventurous food-inspired hats. We’re hoping that this year there’ll be more of the same on show! 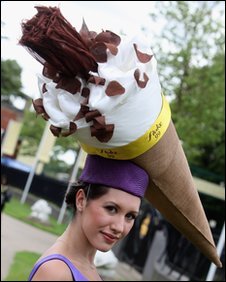 Australia’s sunny shores play host to the British and Irish rugby Lions tour in the next few weeks. Following a warm up match in Perth on June 5th, the team will then head over to the East Coast where they’ll play games against clubs in major cities from Brisbane all the way down to Sydney and Canberra. Luckily for all the rugby fans heading over to enjoy the sporting occasion, when the rugby’s not on, the Australians know how to throw a good party! It goes without saying that we recommend stoking up the Barbie, chucking on a few sausages and kicking back with some of Australia’s best beers!

If you are feeling inspired to cook something seasonal this weekend why not try Ben Tish’s recipe for Chargrilled Lamb Chops with Fresh Peas, Broad Beans & Asparagus.

Heat the olive oil, the stalks from the mint but not the leaves and the garlic in a small pan over a medium heat. When the garlic starts to golden, add the vinegar and season. Remove the pan from the heat and allow the oil to infuse for a few minutes, before straining and discarding the garlic and mint stalks. Reserve.

Next drizzle the chops with olive oil and season well before placing on the grill or the BBQ. Cook for 3-4 minutes on each side or until they are nicely charred, the fat is golden and crisp and the meat is pink in the middle. The meat should spring back a little, when prodded with your finger. When done, remove the chops from the grill or BBQ and leave to rest in a warm spot.

Meanwhile, bring a medium sized saucepan of salted water to a rapid boil over a high heat. Add the peas, beans and asparagus to the water and cook for 3-4 minutes until just tender. Drain well and transfer the vegetables to a bowl. Pour over the infused oil and season well. Crush the vegetables lightly with the back of a fork and mix everything well. Lastly add the mint leaves to the vegetables.

Divide the vegetables between serving plates. Place the lamb chops on top and serve.